The new book by Jim Savage spells out everything parents need to know to navigate the road to successful adolescent drug treatment.

The Rehab Works! Family Recovery Program is a weekly group designed for parents of adolescent and young adult treatment clients to attend while your child is in treatment. LEARN MORE >>

The Journey To Recovery Program

Intensive counseling program for teens and young adults that focuses on building a solid foundation for recovery. 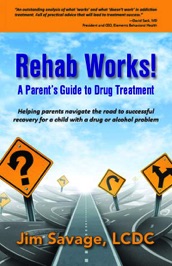 From a Stages of Change perspective, the client clearly acknowledges that he is an addict and that his drug use is a problem. However, we were able to identify some problems in his preparation and action stage efforts. When he completes treatment, he agrees to discharge planning; he signs off on “the plan.” But when he stalls out during the action stage, we were able to see how his commitment to follow the plan has usually been a case of agreeing to do something he either 1) didn't intend to follow, or 2) didn't know what it really meant. For example:

a.  He never followed through with the “peer-based support” part of the plan. This would be the 12-Step recovery part. The first point is to recognize that 12-Step recovery is not the only option for peer-based support. But it's not uncommon for clients to bash AA or NA and say it doesn't work for them. The important point is not about whether 12-Step recovery works, rather is making sure the client understands the implications of peer-based support. A short discussion on the difference between professional care and ongoing social support gave the parents some insight into how this fits into an effective plan. Before he signs off on the plan, he needs to fully understand what the plan entails—in this case, using the 12-Step program the way it is intended to be used.

b. He often does well in treatment, but has routinely sought out drug using friends and related activity soon after discharge from residential. This indicates a lack of understanding or respect for the need to avoid relapse triggers. He probably agreed to a relapse prevention plan that included staying away from using friends. However, it appears that there needs to be more focus on his understanding and commitment to the plan (Preparation Stage).

In some cases, this could indicate a need to review what he has learned about addiction as part of his Contemplation stage work:

a. Addiction is a primary condition: it needs to be arrested to effectively improve in other areas of his life affected by it.

b. Addiction is chronic: he is not “fixed; rather he needs to manage his condition.

c. Addiction is a disease of the brain that leads to loss of control; he can't trust his thinking when it comes to using.

d. Addiction is progressive; it keeps getting worse; he will pick up where he left off.

Understanding the nature of his condition may require him to go back to do some more Contemplation stage work; if he says his drug use is a problem, what exactly does this mean? How well he understands the implications of his problem is directly related to how motivated he will be to follow the plan developed in the Preparation Stage.

Taking control by putting it back on the client

The second area I discussed with the parents was what they can do to reinforce their son's ability to follow through with the plan. From a boundaries perspective, I helped them see how the son remained in control by getting the parents to try to “convince” him to comply with treatment expectations. We examined where there were some cracks in their own ability to set boundaries and how the son uses that to manipulate them and get them to continue providing support while he does what he wants to do. I gave them some tools for stepping out of the power struggle and forcing the son to take responsibility for his treatment.

One of the most effective things I can share with parents is to trust that their child knows what he or she is supposed to be doing; they are being given the tools in treatment. However, they tend to hold out and create power struggles by not using them, and enjoy watching everyone around them try and convince to do so. The simple solution is to say, “That doesn't feel like recovery to me” and withdraw—the implication being that he needs to tell his parents the plan and demonstrate his commitment to following through with the plan. Parents know when it feels right or not. The biggest shifts occur when the parents are able to successfully put it back on the client and not allow them to remain in control.

There are certainly no guarantees for treatment success. But these parents have an excellent opportunity to go into a family week and deliver a message to their son that will demonstrate a significant shift in their approach to his treatment from the perpsective of boundaries and expectations. When young people recognize this foundational shift of putting the responsibility back on them, it's like the back door closing as far as wiggle room, and they realize they're really going to have to do this.

Video presentation using a creative approach for illustrating how the Stages of Change Model can be used to build a solid foundation for recovery.

I worked with some parents last week whose 21-year-old is currently in his eighth treatment placement in the past five years. This young man has made the rounds in some of the country's finest programs including residential drug treatment, therapeutic boarding schools, extended care, wilderness, and IOP. The parents were on their way to family week, and dreading an ordeal over whether or not he will follow the staff recommendation of transferring to a particular extended care program. The boy is making noise about wanting to do something else.

The amount of treatment this child has had was somewhat mind-boggling as a listened to the case history.  I was meeting these folks for the first time, and they were off to family week the following day, then off on a 2-week vacation, so I had to figure out what I might offer them in this one-time shot.

I gave them an overview of how I use the Stages of Change Model for examining a client's treatment progress and making sure their foundation for recovery is solid. We were able to identify cracks in the foundation and use this to help them craft a statement to their son as far as their expectations for his ongoing care.